No two rooms in the hotel are the same. They all have their own atmosphere and colour, and their own unique furniture and fittings. They have been designed by Dorine de Vos, and have a natural mix of styles, so that you have the feeling that you are staying in someone’s house. Original, historical materials have been used in the building. The panelling in the corridors and the headboards, for example, are made from the original doors of the water tower. And the typical iron floor of the water reservoir can still be seen in the rooms on the fifth floor.
Although each room is different, the focal point is always a good bed with top quality bed linen selected with the greatest of care. All rooms have their own bathroom and toilet.

Two of the rooms are extra special:

The Lantern Room, at the top of the tower, and Il Giardino Segreto, in the secret garden.

the different types of rooms

Mentioned room prices are per room, per night, excluding breakfast and excluding local taxes (€ 2,- per adult, per night). 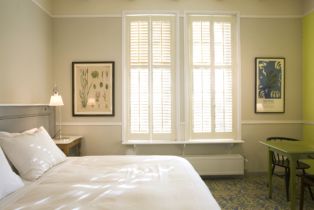 These are light, spacious rooms with high windows: rooms with a view. Here, above the engine rooms, was where the water company’s engineers lived. The rooms are all accessible by lift. 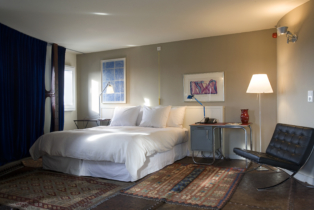 The Dordrecht Water Tower was the first with a flat-bottomed iron reservoir and is the last one remaining in the Netherlands. Eight rooms have been created in the former water reservoir.

The floor of four of the rooms is on the original flat iron bottom of the reservoir. If you stay in these rooms, you are in the most authentic part of the tower – this is where the water used to be! The bathrooms of these four rooms are one floor below, in what used to be the leak trap for the reservoir. They can all be reached by a staircase. These rooms are not suitable for people who have difficulty walking. 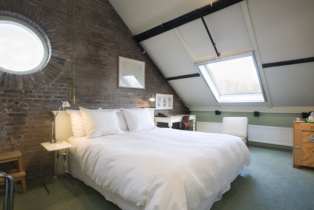 Four rooms have been built on the first floor of the old boiler room, which have the feel of attic rooms with dormer windows. The rooms can only be reached using the stairs and are therefore not suitable for people who have difficulty walking. 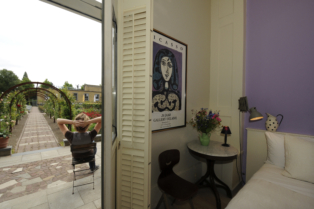 There are eight garden rooms on the ground floor of the former boiler house. From these rooms, you can step straight into the garden.

There are five more rooms in the garden. One is the room in Il Giardino Segreto, but more of that later. Three of these rooms can also be used as family rooms. Two adults and two children under 12 can sleep on the large double bunk bed. You can go through the back door and step from your own veranda onto a grass field with fig and quince trees. And in good weather, you have sun the whole afternoon! 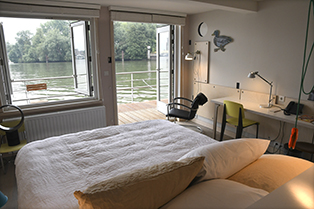 Immediately next to Villa Augustus, in the Wantij river, there is a very special floating office, dating from 1903. For more than a century, it was used by towing companies in the Port of Rotterdam. We have now fitted it out as eight floating hotel rooms. In these rooms, which are accessible via the garden, you can fall asleep to the constantly soft and pleasant lapping of the water.

This special room on the top floor of the water tower offers access to the glass lantern on the top, by way of a spiral staircase. The view offers a broad panorama across Dordrecht. In clear weather, you can even see the Euromast in Rotterdam! From here, you can appreciate Dordrecht’s unique location, at the intersection of three rivers: the Noord, the Merwede and the Oude Maas. This is a place with spectacular light, magnificent skies and often an unforgettable sunset. 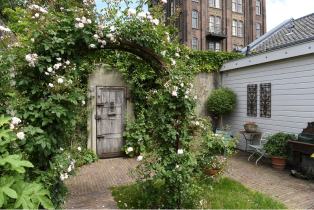 A room in a secret garden
Ssshh….!

Your own room in a walled garden, on the edge of the orchard. Inspired by the great Italian country houses, where the owners gave regular parties and, tired of the continual noise and the guests in the garden, felt the need for privacy and had a giardino segreto laid out, a secret garden where they could be alone for a while. So step into your own walled garden, where peace and quiet reign. And of course, we can’t tell you any more of its secrets....

And here for an overview(PDF) giving all the information you need about the various hotel rooms.

Would you like to know more? Click here to read the history of the water tower on the Wantij and how it became Villa Augustus. Or here if you would prefer a guided tour of the hotel, the garden, the market, the kitchen and the restaurant! Or here for a boat trip through the historic centre of Dordrecht or to the Hollandsche Biesbosch nature reserve.