There is so much more to tell about Villa Augustus. About how the old water tower stopped weeping. About the pop-up gallery Herfst (Autumn) and the artists we invite to exhibit their work there. About our ‘Queens of the Secret Garden’, the artists-in-residence in the Giardino Segreto. And about the guided tours and boat trips, special Encounters in the water tower and musical quartets in the Limonaia...

The history of Villa Augustus

The story of Villa Augustus starts with a photograph. It was taken from a small aeroplane. It must have been around 1930. Below him, the photographer saw a patchwork quilt of rivers, harbours and strips of land. He was looking towards the Biesbosch nature reserve, which advances almost to the edge of the town at this point. On one strip of land there is a water tower, like a castle surrounded by water. Majestic and inescapably beautiful, it draws the attention.

Why the name Augustus?

You don’t just make up a name for no reason. ‘Villa Augustus’ is derived from two underlying ideas. First of all, there is emperor Augustus (63 BC to 14 AD), whose ‘modern’ approach to urban planning helped to usher in a period of relative peace and tranquillity in the Roman Empire. The stability and certainty that this brought enabled the development of the ‘rural villa’ in the first century AD. Rich Romans would withdraw to the countryside to relax in these villas – a combination of farm and retreat for their owners from the city. After the hustle and bustle of the city, they could lead a peaceful and healthy life in the country.

Secondly, in our climate, August is the month of the harvest. At that time of year, the garden is full to bursting with all kinds of produce. So the name was an obvious choice. And, let’s face it, the pump house did look a little like an Italian villa, complete with classical statues on the roof. And look, suddenly – as a kind of parody – there were two hares on the roof. – Margreet Fogteloo in ‘De tuin van Villa Augustus’ (The garden of Villa Augustus)

The hare was already a feature of SPRING Hotels, an early enterprise of Van der Have, de Vos & Loos. SPRING refers both the season and to jumping, so it did not take long to come up with a hare as a logo. And when they were looking for a logo for Villa Augustus, they were quick to choose the hare again, as a symbol of the spring and fertility!

In the Netherlands, hares bring eggs at Easter to signify new life. And they are fun to draw. That’s why they are such a favourite in children’s books. Dorine de Vos drew her first hares at the age of five (see her drawing here below).

The hare is a friend of Villa Augustus. He is to be found not only on the roof, but also on the menus, the programme booklets and other Villa Augustus printed materials. And sometimes, the hare delivers messages to the guests, like ‘Please keep to the paths!’. 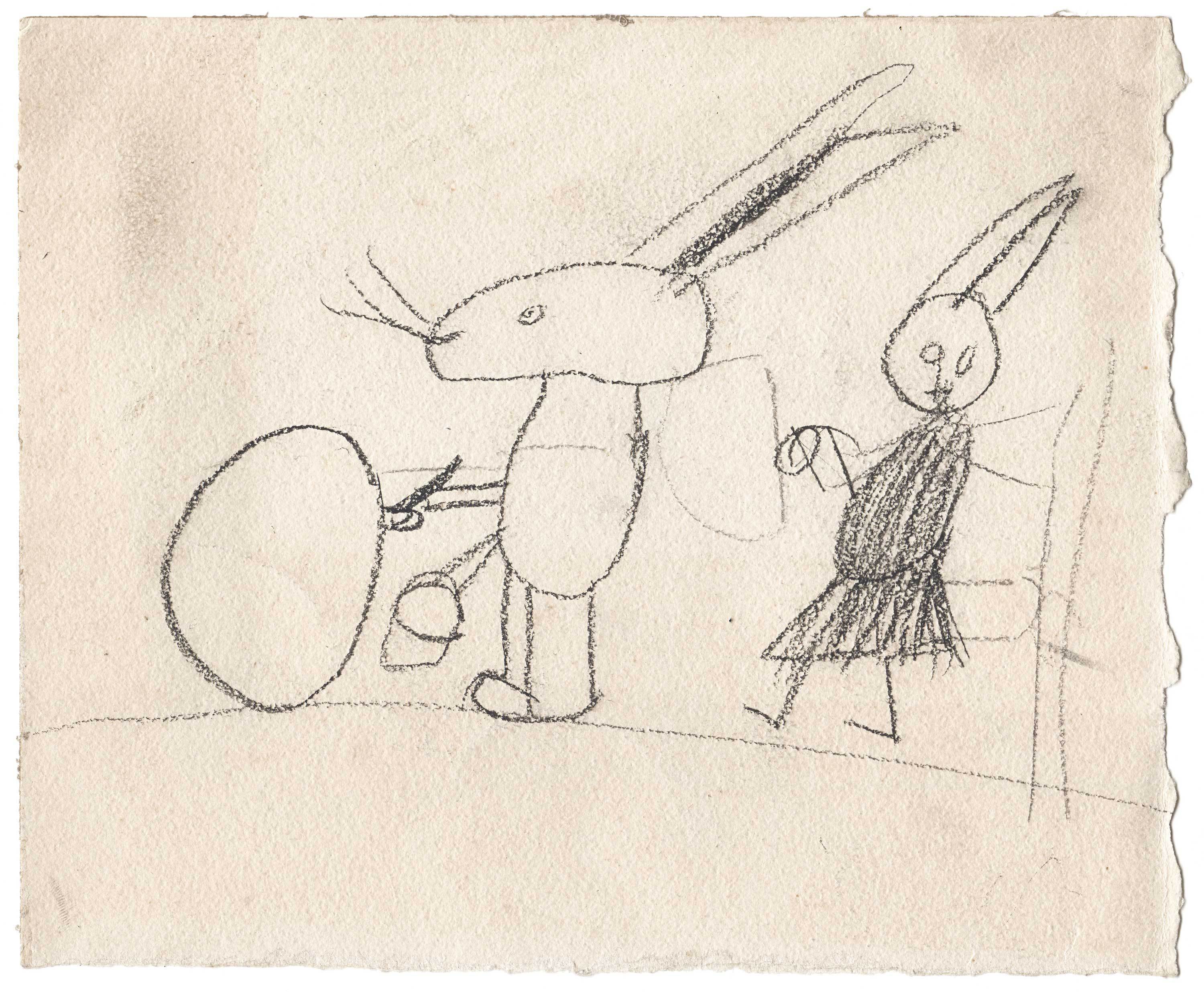 Behind the water tower, there are two small boats moored alongside the landing stage. Our boatmen navigate them through the historic centre of Dordrecht or to the impressive Hollandse Biesbosch nature reserve. If you would rather stay on dry land, there are guided tours of our garden, the kitchen, the restaurant, the market, the bakery and the hotel.

Art makes you look and listen more closely. Having beauty around you, in language, colour, letters, poetry, images and sounds, is important. That is why we invite artists and other guests to take part in our cultural programme. They may be musicians, writers, architects, illustrators, painters, biologists or philosophers. They give concerts in the Limonaia or tell us, during our Encounters, fascinating stories in the tower rooms. About things that always have something to do with Villa Augustus.

Sometimes they exhibit their work in pop-up gallery Herfst (Autumn) in room 24, or spend some time in the secret room in the Giardino Segreto as ‘Queen of the Secret Garden’ (artist-in-residence). They pay for their stay with a story, a poem, a picture, a drawing or something else.

See our programme in Dutch

Queens of the Secret Garden

In the garden of Villa Augustus, next to the Limonaia, there is a room in a walled garden, a secret place. It is a garden of delights, where all elements of the secret garden come together: being alone – and yet not completely, silence, sunshine and roses. A place to retreat to, to read, write, think, or simply enjoy the garden. A wonderful place for artists-in-residence…

Villa Augustus asks special people to come and stay in the Secret Garden. They may be writers, illustrators, painters, biologists or philosophers … They are our ‘Queens of the Secret Garden’. Nathalie Lété is one of them, and Gummbah, Martin Jarrie, Wouter Klootwijk and Harriët van Reek, to name but a few. They spend a few nights in the Giardino Segreto in exchange for a story, a poem, a picture, a drawing or something else inspired by their stay.

Herfst (Autumn) is the pop-up gallery at Villa Augustus. Now and again, room 24, in the garden, is turned into a temporary exhibition space. We invite artists to come here and exhibit their work. French illustrator and designer Nathalie Lété was the first to open the sliding door of Herfst, in 2014. After that, during Easter 2015, there was an exhibition of the hares drawn for Villa Augustus by Dorine de Vos. And in the autumn of the same year, room 24 featured the wondrous worlds, flowers and vegetables of French illustrator and artist Martin Jarrie.

Villa Augustus gift vouchers make a great present! The vouchers are valid for 2 years and can be used in the hotel, the restaurant and the market. You can buy a voucher for any amount you wish.

You can buy gift vouchers at the hotel reception between 7 am and 11 pm and in the market between opening hours. We can also send you a gift voucher by post or e-mail. For fun gift suggestions check out our gift voucher page. 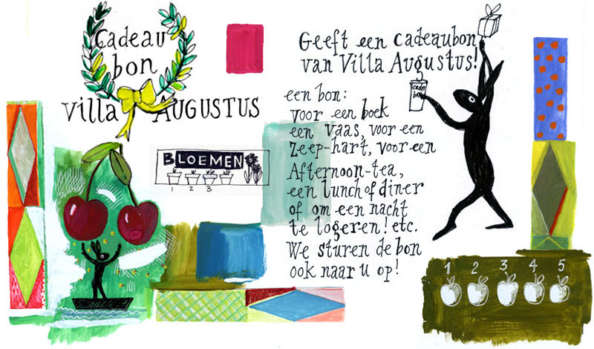 All the information you need on Villa Augustus

All overviews (pdf) with information on Villa Augustus: